Welcome to my Cabaret

A little something about me.

I was lucky enough to have two grandmothers who were both gifted musicians. My father’s mother played classical piano, while my mother’s mother learned to play piano by ear. Together they introduced me to Broadway musicals as a child and I have many wonderful memories of summer nights spent listening to the songs of musicals performed “in the round”.

My own mother sang acappella in college and so with four kids and many long car rides from Boston to NYC — of course she taught us all a cappella 4 part harmony to keep us out of trouble. To this day we can break out into song, rounds, and harmony on cue!

I began acting and singing in musicals at the age of five in summer stock productions in Connecticut. And so it began. From the moment I performed on stage I knew I had found my passion. This led me to perform all through high school and college, and to continue singing in Paris — where I was lucky enough to perform with the Paris Symphony Chorus. There, in the gorgeous Salle Pleyel I performed alongside greats like Jesse Norman, Daniel Barenboim, Zubin Mehta, and others.

After graduating from Williams College, I received a fellowship to continue my voice studies at the Conservatory of Music of Geneva, Switzerland, where I went on to win the Darrow’s Prize in Musical Theater. In Switzerland , I starred in productions of “Cats”, “Evita” and “Hello Dolly”, and performed as Josephine Baker in “Parisian Cabaret”.

Once I returned to the USA, I continued to perform in Chicago, Boston, San Francisco and Los Angeles. After recording my first CD entitled “Unexpected Songs”, I began to write and perform in one-woman shows with guest artists all around the San Francisco Bay Area.

As life comes full circle, my own son, Alexander, now performs with me when he is in town.

A gifted acappella and classical tenor in his own right, my son Alexander continues the path forged by my two grandmothers and my mother before me — as together we share the gift of music with all of you! 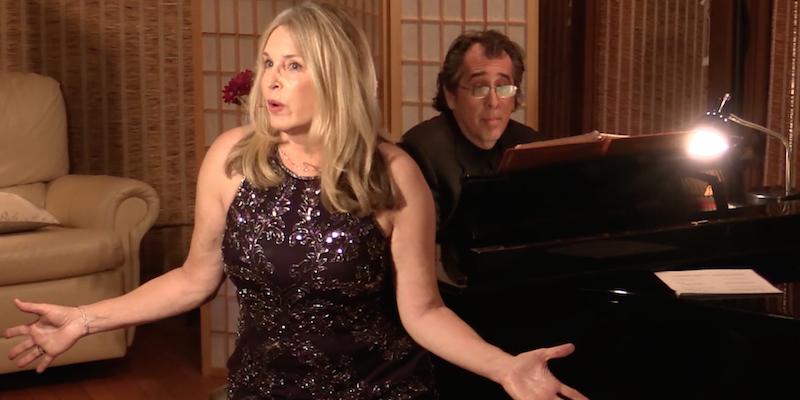 I began acting and singing in musicals at the age of five in summer stock productions in Connecticut. And so it began. From the moment I performed on stage I knew I had found my passion.